Lesson 2 - The pyramids - who built them and how

WALT: Investigate who built the pyramids and how

Who built the pyramids?

People thought that slaves built the pyramids because of something that the Greek historian Herodotus wrote. He described the builders as slaves. This has inspired people through history to create films and stories showing the builders as badly treated slaves.

Now we have more of an understanding of who built the pyramids, let's find out what their life was like. Watch the clips below. The BBC have create a fictional character based on evidence found by archaeologists.

It wasn't an easy job building the pyramids. They were huge! Let's find out some more of the details about how they were built.
Let's learn about some of the different pyramids:

Now if you have access to some playdough (make lots of cubes), Lego (just the cube blocks though) or building blocks at home, can you have a go at making a pyramid? Remember to build it layer by layer.

If you're using playdough, once you've built the pyramid with your bricks, you can shape the sides with a carving tool like the ancient Egyptians did. 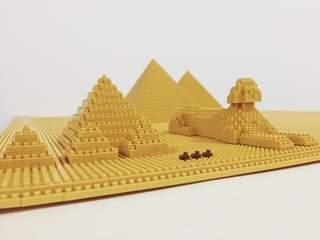 If you're feeling mathematical, have a go at using the extension sheet to predict how many cubes you're going to need.