What's on this month?

Friday 2nd April is GOOD FRIDAY in the Christian Calendar, followed by EASTER SUNDAY on the 4th. The children at St Katherine's have been studying the topic of SALVATION in the two weeks leading up to the Easter Festival and they will continue in the two weeks after.

Watch out for evidence of their work.

The Islamic festival of Ramadan begins on Monday April 12th. Ramadan is the ninth lunar month of the Islamic calendar. Fasting (sawm) is one of the Five Pillars of Islam and during Ramadan, Muslims will give to charity and help those less fortunate.

There is further explanation of the significance of this festival at the website below.

And on 23rd April, it is St George's Day - a religious holiday celebrated by Christian churches to represent the Feast of St George. Held on what is thought to be the anniversary of St George's death, this day is celebrated all over the world as many countries consider George their Patron Saint. St George was a soldier of Greek origin who died for his religious beliefs following anti-Christian persecution from the Roman Empire. His figure has been further immortalised through the Legend of St George and the Dragon.

March begins with a celebration of St David, the patron saint of Wales. Born about 52oAD, David (or Dewi, his name in Welsh) was a Christian priest who lived on an island and studied the Bible for many years. He then founded a monastery where life was very strict. David’s monks worked hard, could only eat bread and vegetables and were rarely allowed to speak.

David went on to establish many churches across Wales and he became a Bishop. His cathedral (St David’s) is the largest in Wales and he died about 620AD. On his special day, March 1st, people wear the national symbols of Wales, the daffodil and the leek and (pre and post Covid) parades and concerts are held to celebrate his life and achievements.

British Science Week also begins on March 5th and Children in Class 1 have been reading about female scientists. They have recorded some lovely book review sessions to tell us all about what they learned.

Class 6 also researched some female scientists and made some trump cards to celebrate their achievements. See their display below.

Riley and Arthur-John read and talked about 'Ada Twist, Scientist' by Andrea Beaty and David Roberts 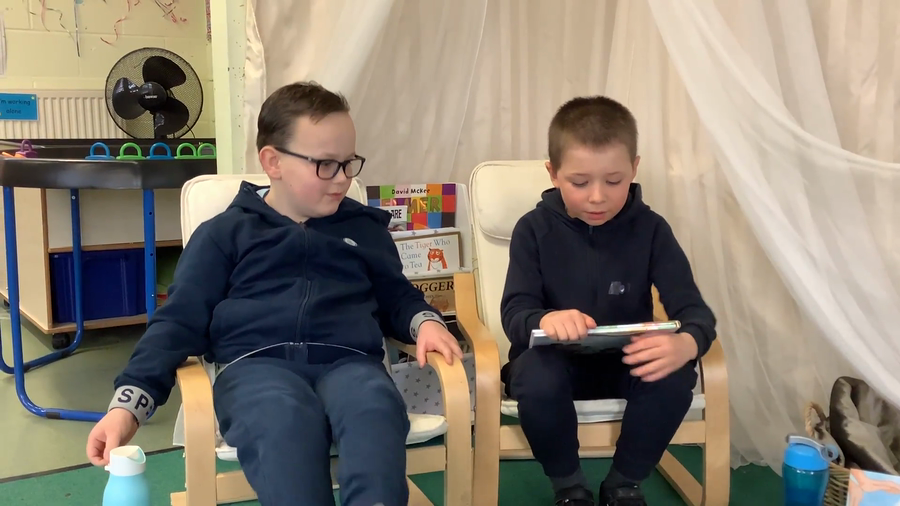 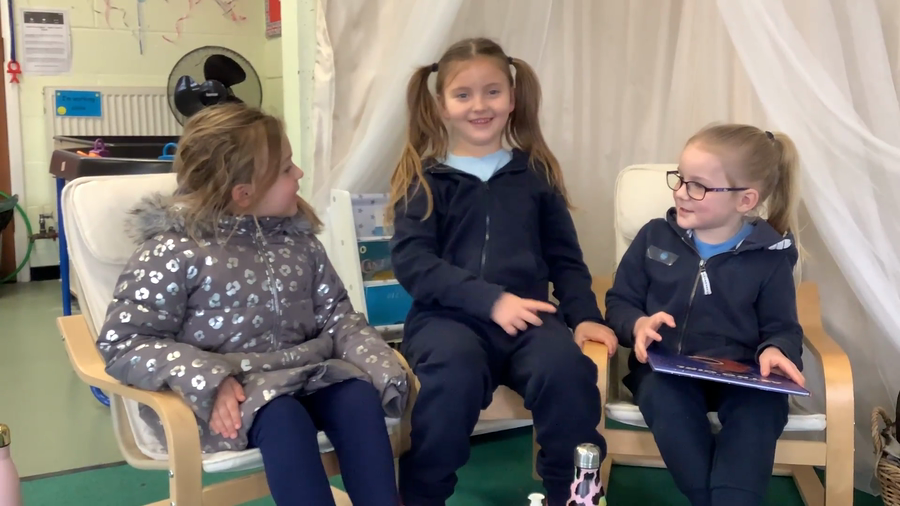 March 17th is St Patrick's Day - the patron saint of Ireland. Find out more at the website below.

Passover begins at sunset on Saturday 27th March and it ends at nightfall on Sunday 28th. At Passover, Jews remember the Biblical story of Exodus, where God freed the Israelites from slavery in Egypt. It is known as Pesach in Hebrew and commemorates the sparing of the firstborn sons of God's people. It is a seven day festival and Jews across the world, including here in the UK, will enjoy a holiday from work and stop eating bread and bread products made form yeast.

February’s big event is probably Chinese New Year, which is celebrated on the 12th of this month. Each year of the Calendar represents one of the twelve zodiac animals: Rat, Ox, Tiger, Rabbit, Dragon, Snake, Horse, Goat, Monkey, Rooster, Dog and Pig. 2021 marks the Year of the Ox.

Shrove Tuesday is a Christian festival celebrated in many countries across the globe. It falls on the Tuesday before the beginning of Lent – a period of around six weeks leading up to Easter. During Lent, Christians give up luxuries to remember when Jesus went into the desert for 40 days to fast and pray.

The exact date of Shrove Tuesday changes from year to year. But one thing stays the same — it’s always 47 days before Easter Sunday. And yes, you guessed it, it’s always on a Tuesday! This year it is the 16th!

The name comes from the old word ‘shriving’, which means to listen to someone’s sins and forgive them. In Anglo-Saxon England, Christians would go to church on Shrove Tuesday to confess their sins and clean their soul. In other words, they would be ‘shriven’.

In the United Kingdom, Ireland, Australia and Canada, Shrove Tuesday has another name… Pancake Day! Traditionally during Lent, Christians would give up rich, tasty foods such as butter, eggs, sugar and fat (some Christians continue to do so, in fact). Shrove Tuesday was the last chance to eat them – and what better way to do so than with a delicious pancake!

Shrove Tuesday is followed by Ash wednesday. Many Christians attend an Ash Wednesday service at church and during this service, the priest or minister may rub the sign of the cross on their foreheads using ashes which represent repentence.

Finally, Nirvana Day is a Mahayana Buddhist holiday celebrated in East Asia. It commemorates the day the Buddha is said to have achieved complete Nirvana – a sense of being where there is no suffering but a feeling of complete peace.

This is celebrated on the 8th of this month.

World Braille Day is January 4th and gives us an opportunity to raise awareness of the issues impacting those who are blind or visually impaired within our society. It is the birthday of Louis Braille, who born in 1809 and blinded as a result of a childhood accident. Determined to overcome his hardships, he was inspired to invent a tactile reading and writing method, now known as Braille, at just 15 years of age.

Wednesday 6th January is Epiphany, when we remember the Magi’s visit to the baby Jesus and the baptism of Jesus by John the Baptist.

This day is always celebrated on the third Sunday of January and its aim is to promote understanding and peace between all religions, encouraging people to learn about other faiths and their followers. Class 6 will be beginning a study of Sikhism and the importance of the Guru Granth Sahib and the Gurdwara - look out for photos of their learning.

The Holocaust Memorial Day Trust encourages remembrance in a world scarred by genocide. We remember the six millioin Jews murdered during the Holocaust, alongside the millions of others killed under Nazi Persecution and the subsequent genocides in Cambodia, Rwanda, Bosnia and Darfur. January 27th marks the anniversary of the liberation of Auschwitz-Birkenau, the largest Nazi death camp.

Hanukkah (or Chanukkah) begins on Thursday 10th December and ends on Friday 18th December. It is known as the Festival of Lights. Click on the links below to find out more about this festival. Look out also for Hanukkah work carried out by Class 2.

The International Day of Persons with Disabilities is celebrated on Thursday December 3rd. It is designed to recognise and value the diversity of our global community and to cherish the role we all play, regardless of our abilities. We can learn from the experiences of people living with a disability; look forward to a world where a person is not judged by their abilities or disabilities and we can all make a commitment to create a world characterised by equal human rights.

Find out more at the link below:

Anti-Bullying Week starts on Monday 16th November - find out more at the web link below.

UK Disability History Month starts on Wednesday 18th November. Its theme is 'How far have we come?' and 'How far have we to go?' It is launched online and continues until Friday 18th December.

Remembrance Sunday is 8th November this year. Learn all about it at:

Sunday 1st November is All Saints' Day, celebrated in honour of all the Christian Saints - known or unknown. Find out more at the website below.

Diwali is the Hindu Festival of lights. It usually lasts five days and symbolises the spiritual victory of light over darkness, good over evil and knowledge over ignorance.

Class 1 enjoyed a range of activities to commemorate Black History Month. They learned about the CBeebies' presenters' heroes and listened to some lovely discussion between fathers and their young daughters about what each knew about Black History. They made red buses full of people of colour and celebrated how we are all different and completely unique and individual. In English, they have been reading Handa's Surprise and they were surprised to learn how many cities there are all across Africa! It was not how they pictured the continent at all.

See their fabulous buses below.

Class 2 enjoyed learning about a number of different heroes during Black History Month. They found out all about Rosa Parks and Mary Seacole and compared how their achievements and contributions to the past were very similar. Both were independent, strong women who refused to give up in the fight against injustice. Great work Class 2!

Class 3 created this wonderful wreath of hands during Black History Month to celebrate their differences and as part of their work on 'Give Racism the Red Card'.

Class 4 have been doing some fabulous work based on the book 'I am not a label' by Cerrie Burnell, which describes the lives and contributions of 34 artists, thinkers, athletes and activists from a range of diverse backgrounds and cultures. They have already investigated the singer and songwriter Stevie Wonder, the astronomer Wanda Diaz-Merced and the athlete Emmanuel Ofusu Yeboah.

They are also starting to explore the incredible life of Malala Yousafzai, through her autobiography: 'I am Malala - The girl who stood up for education and was shot by the Taliban.'

Class 5 are working on a magnificent piece of artwork on Nelson Mandela and they have been learning about this incredible man and his contribution to the 'rainbow nation' of South Africa - we can't wait to see the finished project.

Class 6 learned all about the dancer Oti Mabuse's heroes through some fabulous Horrible Histories videos. Some of these were very famous, like Rosa Parks and Barak Obama but some were less well-known like the spy Mary Bowser, who posed as a slave in the American Civil War to pass secrets from the Confederates to the Union in the latter's bid to end slavery. The children followed this with some in depth comprehension on Nelson Mandela and the development and significance of Black History month.